The famous English carol "Angels We Have Heard On High" is actually an English translation of an 18th-century French carol, "Les anges dans nos campagnes." In the English carol (and also in the French carol), the refrain is usually sung in Latin: Gloria in excelsis Deo. You can find the English lyrics along with a MIDI music file and sheet music at the Hymns and Carols of Christmas website. This site also provides the words to the French carol. There is music with four-part harmony at the Christian Classics Ethereal Library site. There is also a Wikipedia article about this carol.

I found a Latin version of this carol by Harry Maynard online. It is not exactly a translation of the traditional English carol, but it is clearly meant to be sunt to the same melody. Even though there is just one verse provided, I thought it was worth including here, as this is one of the most beautiful and best-known English Christmas carol melodies. Note that Maynard provides a refrain that is different from the Latin refrain usually sung with the English carol.

From the comments below (thank you!), I can offer this version with more verses! Wonderful! 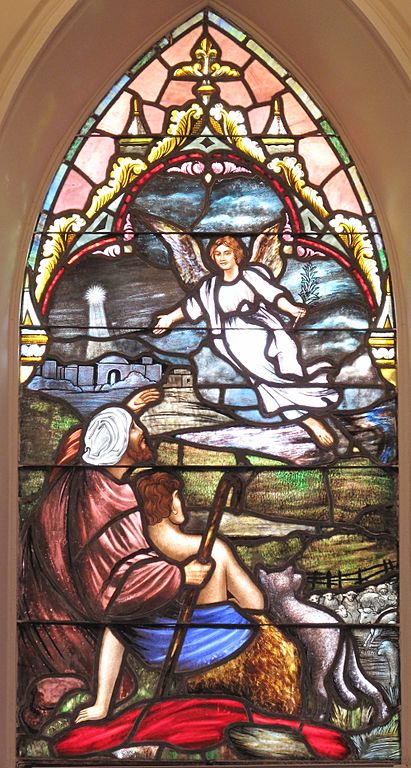 In case you are interested, last year I adapted the Maynard for my own Latin students as follows, eliminating as I did so the problem of that pesky extra syllable. I added a couple of new verses as well.

You will note that I kept the original Latin refrain. I can't exactly read his mind, but I suspect Harry M. was thinking (& validly), "Why use the traditional Latin chorus in a version of the carol that is entirely in Latin when in the original French & English the chorus was supposed to stand out as different--as coming from a loftier, more sacred language (or at least one that was perceived that way), thus giving the impression of going back to an ancient original?"

I tried to solve the problem by adapting the Greek of Luke's Gospel text of the passage (can't get much more original than that) to fit the meter of the carol (which was actually not that hard to do), but none of my students understand Greek & they couldn't sing it with a straight face.

Then I saw the light. Why was I trying to alter, in the interest of singing a Latin Christmas carol, a text that was already in Latin?

In any case, if anyone who reads this is interested (that is, if there is anyone out there who even reads this), I remained true to Harry Maynard's translation by making the two verses I added culminate in the "adorate Dominum" of the chorus in Harry's version.

more from DJC (sent via email):

I like the version with the masculine endings in lines 1 & 3. But the original French has feminine endings, as in your original Latin: "Les anges dans nos campagnes." The tune as sung by the French have an extra note (do) to carry the last syllable of those lines.

Thank you for the helpful replies!

There's a fourth verse in English:

See Him in a manger laid,
Whom the choirs of angels praise;
Mary, Joseph, lend your aid,
While our hearts in love we raise.
Gloria &c.